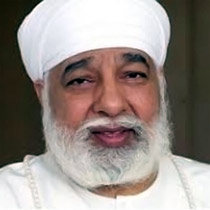 Here you can watch all recordings from the World Health Congress 2021 Prague 10th - 12th September 2021.

Initiator and Lead Secretariat at the All-Party Parliamentary Group (APPG) on Indian Traditional Sciences, he is a prominent lecturer, practitioner and author on India’s Traditional Sciences and has been instrumental in ensuring Ayurveda and Traditional Sciences remain at the heart of the soft power alliances between India and the UK. On 18th April 2018, he oversaw the launch of a new Yoga Centre of Excellence and Indian Traditional Medicine by His Royal Highness the Prince of Wales and Prime Minister Narendra Modi as a first-of-its kind global network for evidence-based research on Yoga and Ayurveda.

He believes in a holistic approach that enshrines the body, mind and soul, aiming to treat the cause not just the symptom of the disease thus helping the body release its healing potential. The aim of any holistic application is to empower the patients through knowledge and education so as to help them make informed choices and prudent decisions.

A long-time champion of Traditional Medicines, he has recently initiated a European-wide millionstrong petition (https://www.change.org/p/european-parliament-incorporate-yoga-and-ayurveda-into-european-healthcare) to campaign for freedom of choice for all citizens of European Union to have access to Traditional Medicines.

His training programmes are world renowned for the clarity of their presentation and structure and his unique and charismatic entertaining style in his professional training workshops is always packed with practical and spiritual knowledge, that will give the learner a level of understanding and expertise, which would not normally be available from training courses perhaps outside India.

Namaste, good afternoon. I want to start off, first of all, by thanking you for this invitation here this afternoon and the opportunity to be in the addressed company of these wonderful personalities that you have been able to bring together for this meeting today, Tomas.

And I‘m also glad to say to the panel that since I came into contact with Tomas through my very good and very learned friend professor Thangavelu two years ago, I‘ve had such an amazing spot for all the activities that I‘m involved with in both parliaments - in the EU Parliament in Brussels and also in my host Parliament, which is the British Parliament in England. Tomas and his assistants Alenka, Ludmila and Markéta have been wonderful guests of mine and they have been supporting all the work that we are doing and I hope that they continue to do so in the future.

I just want to bring your attention to some issues that were created by the European Union Parliament almost a decade ago. My very learned friend Nora is here with us, and she must remember this because I made contact with her at that time, ten years ago, and I also made contact with Harsha Gramminger, who has now been succeeded by my very good friend Peter Kath, who is also here today with us.

The EU wanted to bring about the European Union‘s directive on traditional herbal medicine, the THMPD products directive. What Europe wanted to do is that they wanted to remove herbal medicines from within the European borders. Why would they want to do that? People on this planet have been enjoying herbal medicines ever since this universe started, and in fact, even today, the World Health Organization estimates that 70 percent of the world’s population still relies on herbal traditions. We won’t actually go too much deeper and diverge into what is the root cause of this, because unfortunately this is all to do with making money.

Our friends on the other side are not really satisfied with earning something like a 55-60 billion dollar profit. That‘s not good enough for them.

So here in England we thought: How do we challenge this THMPD that the European Union has initiated? And so we embarked upon this vessel, we created a platform to fight for our right.

We set up a very powerful campaign to save herbal medicine. At that time, ten years ago – I didn‘t have so much white hair – and we just started and with the grace of the universe, we very quickly generated hundreds and thousands of signatures to petition David Cameron‘s government saying that we need our freedom of choice.

There must be a choice, there must be an option here also! The divine trinity of Shiva, Vishnu and Brahma listened to the hard efforts of all my colleagues here and the British government actually made a U-turn. Nora is actually part of that campaign that we started, her signature is still on the memorandum that we gave the government.

We are very happy and we‘re delighted that the British government made a U-turn. My learned friend mentioned a quote by Gandhi, but I am a little different to Mr. Gandhi and I always say that if you can‘t run, walk, and if you can‘t walk, crawl.

So we cooperated with hundreds and hundreds of different communities, not just the Ayurveda community that I represent, but also Western herbal medicine and African medicine, Latin American medicine and traditional Chinese medicine, Tibetan medicine, and Japanese medicine. To get everybody together under one umbrella was a humongous task and I think it was even more challenging than fighting for freedom of choice.

There needs to be a drive above and beyond where we are all operating so that we are speaking to the people who make the regulations. And we need to speak their language. We had some very good political friends in the Parliament, and we then realised, that if the West can do this to Ayurveda and traditional medicines, tomorrow they will do the same to yoga and then they will do the same to other Indian traditional sciences such as Jyotish, India‘s astronomy and astrology which is used for health and healthcare.

Thereby we enacted a very powerful group of amazing parliamentarians in the UK to bring about the establishment to creating awareness among the British parliamentary community and the policymaking community.

Those are the meetings that you have been attending, Tomas, where parliamentarians gather. There are about 200 people at our meetings, the rooms are jam-packed. There is so much interest. It‘s really elevating. If we spend five years learning kinesiology, if we spend five years learning Ayurveda, if we spend a whole lifetime learning yoga, then why would we want to leave the policing of our sciences to a bunch of people who have no idea what we‘re doing.

That has been my focus, to really bring about awareness within the parliamentary community and I‘m delighted that you have very kindly invited madame Miloslava Rutová here this afternoon and that she has also very graciously given her consent to join us tomorrow at the International Yoga Day. These are the right steps to take, to move into these areas. At the end of the day, it is the parliament that will make regulations, whether we exist or not. And so we have to have to join forces and we have to find good friends to make all these wonderful things happen.

I am privileged to talk to you here today on behalf of the British Complementary Medical Association, and we have a united force representing the values of Ayurveda and yoga here in the UK. I want to welcome all the representatives who are here and the panel that has gathered here.

It is a long journey and, as we all say, it begins with a single step. We are on the right path and more and more parliamentarians are beginning to listen to us.

For example, in England we have a population of 70 million people, of which 35 percent want to consider being treated traditional medical care. We are one of those very lucky countries in the world where access to healthcare is free, we do not pay anything to anybody – it is free. So, despite the fact that 70 million people have access to free healthcare, people still want to pay, say, 50 pounds, 50 euros, 100 euros, 200 euros to go and have an Ayurveda consultation, to have a kinesiology consultation, to have a shiatsu consultation, to have a Reiki treatment and they are happy to pay for that. Because people in this country know that the allopathic medicine is not working.

I invite all of you - when you feel it‘s appropriate for you – to please come and see the work that we have done and the work we are doing. Tomorrow we have a webinar on Zoom from 12 o‘clock in the afternoon British time to 5 o‘clock in the evening. If you join us, you will actually witness British parliamentarians joining and promoting yoga and promoting the ancient spiritual values of India, and you will see other stakeholders doing the same.

It has been a long journey, but I am fascinated and very excited to be amongst these people who are making things happen for us. They have no idea about healing, they have no idea about herbal traditions, but the question is how do we actually make them understand that we are like normal people - we also like to have ice cream - but what we can give them is something that they talk about but do not do? Namely, that is prevention is better than a cure.

Thank you so much for this wonderful opportunity to be with all of you and I look forward to your support, your continued guidance and all of your blessings to the success that the traditional medicine deserves on this planet. Thank you so much.