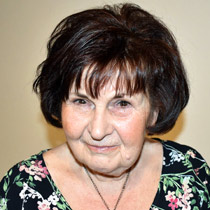 Here you can watch all recordings from the World Health Congress 2021 Prague 10th - 12th September 2021.

In 1961 - 1966 she graduated with honours from the Faculty of Science, Charles University, in biology-chemistry, specializing in animal and human physiology, She completed her postgraduate studies at the Department of General Zoology and in 1971 obtained the degree RNDr. (Czech equivalent of master‘s degree in science) and in 1972 degree of Candidate of Science (CSc., Czech equivalent of Ph.D.). In 1980, after defending her doctoral thesis, the Physiological Function of Phospholipids in Biological Membranes, she was appointed Associate Professor of General and Comparative Physiology. She completed several study stays abroad (Poland, Netherlands, USSR, GDR). In 1981 she was appointed Head of the Department of Physiology and Developmental Biology, Faculty of Science, Charles University. She held this position until 1990. In 1987 she defended her Ph.D. thesis, the Physiological Function of Phosphoinositides, and earned her DrSc. degree (Czech equivalent of Research Professor). In 1989, president of the Czech Republic appointed her professor of physiology. She worked at the Department of Physiology and Developmental Biology at the Faculty of Science, Charles University, until her retirement (2006). She taught biology at the Waldorf Lyceum for one school year; in 2007–2012 she worked part-time in the Laboratory of Biochemical Neuropharmacology of the Institute of Medical Biochemistry and Laboratory Diagnostics of the First Faculty of Medicine.

She has been an investigator of a number of scientific projects, author of five university textbooks, member of an editorial board of the News in Physiological Sciences (USA) and a journal Fluoride, a member of several Czech and international scientific societies. In 1995 she received a diploma Woman of the Year from the American Biography Institute.

In cooperation with prof. MUDr. Cyril Höschl, she researched Alzheimer‘s disease and won several awards in this area. She has published more than 300 scientific papers and 14 popularization books, some of which have become bestsellers (see www.strunecka.cz). In 1990 she attended a 2-month course at the Center of Non-traditional Medicine in Moscow and for 15 years she was engaged in healing using contactless massage.

Since 2006 she has been researching the pathogenesis of autism spectrum disorders and her articles in foreign journals have received a great response. She is repeatedly invited to various world congresses. She gives lectures and writes journal articles. Her husband Otakar died in 2009, she has 2 children, MUDr. Kateřina Seimlová (1965) and Mgr. Otakar Strunecký, Ph.D. (1974).

I feel it is my duty to thank Mr. Tomas Pfeiffer in particular for his activities regarding the World Health Congress 2020 Prague. My thanks and admiration especially go out to his lifelong efforts in introducing, promoting and recognizing traditional, complementary and integrative medicine within the European Union and around the world. Dr. Eva Krizova from the Czech Republic thanked Tomas Pfeiffer here, because for decades we have had the opportunity to follow his daily activities, his work in the media, his work at the centre, and his medicinal work.

We know all too well that the situation in the Czech Republic is far from being as nice as the one in the UK, as described by the last speaker. For us, it still takes a great deal of courage and a very strong conviction to deliver these speeches. You really have to have a big personality because there’s always the risk of receiving a backlash for the things you say, as I myself have experienced first-hand.

I am honoured to be invited to contribute to the development of the Platform 2020 Prague project and the 2021 Congress in Prague. The Covid pandemic has forced us to postpone our meeting in person by a whole year, so we now have the opportunity to discuss and contemplate how to unite and strengthen our voices. Based on what we‘ve seen from the contributions of previous speakers, the way we perceive the current tasks varies depending on what state and locality we are in, and so, perhaps what I will say here will seem too elementary for many people.

My profession is physiology and biomedicine. I spent 40 years at the Faculty of Science at Charles University, for ten of which I held the position of Head of the Department of Physiology and Developmental Biology. I have given lectures on immunology, so I have unfortunately also been heavily involved in many discussions about vaccination in recent years, something that happens to be a very controversial and complicated area.

I also have five years‘ experience working in the biology and neuropharmacology laboratory at the Institute of Medical Biochemistry and Laboratory Diagnostics at the General University Hospital and of The First Faculty of Medicine of Charles University, and for more than 30 years I have been engaged with holistic and integrative approaches to human health and the possibilities of TCIM as part of research work and in practical application. I have also run a medicinal practice for 15 years.

I have written over 300 scholarly publications and 15 popular science books for the general public. In response to the previous speaker, I would just like to make a small comment that one of my latest books is entitled Medicinal Herbs and Mental Health. I wrote this book because I have lived and worked among psychiatrists for many years and, unfortunately, as far as medicinal herbs are concerned, the European Union continues to throw a spanner in the works and refuses to allow manufacturers to even write about the benefits of their products.

Thus, since 2012, there has been what‘s known as the ‘on-hold’ list, which prevents manufacturers from writing what the product is good for on it. And we are still waiting for the European Union to come to the consensus that it could be worth venturing into medicinal herbs a bit more.

The Covid Pandemic and the Autism Spectrum Disorder Epidemic

Today, I would just like to briefly mention some experiences and different approaches to lege artis and TCIM medicine, particularly when it comes to the Covid pandemic and the autism spectrum disorder epidemic. We’ve all just experienced this pandemic, and autism is one of my favourite issues. I have also prepared a Bender case study on autism for the scheduled Congress, which was due to take place today.

While lege artis medicine has failed to offer effective treatment to most coronavirus-positive patients, we all know very well that TCIM approaches have mainly recommended the kind of care that boosts the immune system and utilizes vitamin and mineral supplements. Thus, it could be said that these are matters that are professionally researched, clear, and proven in biomedicine and have nothing to do with homoeopathy, energy healing or even Ayurveda or other similar fields that are simply not within central interests. But vitamins and minerals... These are things that lege artis medicine cannot doubt the effectiveness of. It is also, of course, understandable that various medicinal herbs have been tested and used in China. However, representatives of lege artis medicine abroad and in the Czech Republic oppose any form of TCIM recommendation, citing them as being unverified and providing false information.

Covid is a completely new disease and the properties of this virus are practically unknown. But the effect that vitamins (D3, C, group B) and minerals (zinc, magnesium, calcium) have on boosting the immune system has long been known and traditionally used. Likewise, traditionally proven medicinal herbs can only be recommended, as the speaker before me said, with multiple effects.

We know that lege artis medicine allowed for therapy testing with the anti-malarial drug Plaquenil. It was applied to a group of 1,542 people infected with Covid-19 and was used as a preventative drug by the president of the United States of America, who personally advocated for it. There have even been 24 million news reports on Google that the president of the United States has been using Plaquenil, which tells us that the media has been inadvertently running a huge ad campaign on the drug. However, this therapy was considered ineffective as it failed to reduce the number of deaths. Nevertheless, lege artis medicine accepted this therapy.

Now picture tonnes of scientifically inaccurate information on the side effects of vitamin D3 popping up on various foreign news sites. Readers have been warned that taking this vitamin can result in death or cause a number of unwanted side effects. In the Czech Republic, for example, a video by Kampa Theatre was censored because it was labelled as a source of misinformation. The video consisted of an interview with Jaroslav Dusek and Milan Calabek about their experiences with traditional Chinese medicine, using herbal teas, and the effect vitamins have on boosting the immune system.

I would argue that these are textbook examples of just how far, and to what extremes, knowledge can go, which in a sense we also tend to place among traditional, complementary and integrative medicine.

I mentioned earlier that I had originally planned to discuss issues, case studies, and treatments surrounding autism spectrum disorders at this year‘s scheduled Congress. It just so happens to be the world‘s fastest-growing developmental disorder, affecting three to four percent of children in some countries, which is indeed an indication of an epidemic. While the etiopathogenesis of ASD is still unclear from a lege artis medicinal point of view and no effective therapeutic approaches are known, TCIM offers numerous cases of amelioration of symptoms of these disorders.

A high prevalence of ASD is reported in industrialised countries with water fluoridation, as well as in Asian countries with endemic fluorosis. Our theory, therefore, points to the key role that fluorides play in the etiopathogenesis of autism. The prevalence of autism in the European Union is still relatively low, as most European countries stopped water fluoridation shortly after its introduction in the 1970s and 1990s.

And so we have dared to propose the theory that fluoride is one of the key causes of autism. Our publications on this topic in the professional foreign press have a readership in the thousands and are among the most read articles.

There is currently a divergence between the practice of fluoridated drinking water, which official medicine and health education considers to be an effective and safe form of protection against tooth decay, and current scientific knowledge, which provides evidence of fluoride as a neurotoxin that impairs both prenatal and postnatal brain development.

We are now also showing that the multiple toxic effects of fluoride may be the cause of unexpected epidemics in the near future. Based on complementary and integrative approaches to medicine, vitamins and minerals can be understood and professionally explained as potential supplementary interventions in the treatment of autism.

My contribution to the Congress next year, documents a case where a boy’s autism symptoms were ameliorated in the Czech Republic. More on this topic can be found in our publications and books.

As part of the Platform 2020 Prague project, I would like to spread the idea of the holistic and integrative effect of vitamins, minerals and medicinal plants in the prevention and intervention of a number of major contemporary diseases.

I look forward to working together with you.