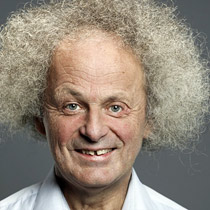 Born August 16th, 1956 in Klagenfurt, Austria, I studied biology and human physiology in Graz, Austria. After an assistant professorship at the Physiological Institute in Graz I was visiting assistant professor in the UVA (University of Virginia, Dept of Biomedical Engineering) in Charlottesville, Virginia in 1988.

In the 1990 I took part as Principal Investigator of the Austrian-Russian „Austro-Mir“ spaceflight mission in several medical experiments, among them sleep and cardiovascular studies, coordinating a team of 20 coworkers and ccoperated until 2000 with the Institute for Biomedical Problems in Moscow, Russia. Sleep studies and monitoring in six further space missions, among which was the longest manned spaceflight ever (more than 14 months) followed. Sleep and cardiovascular parameters of all Russian cosmonauts were measured using our equipment during the 1990ties.

Since 1991 I am associate professor for physiology in Graz at the Chair of Physiology, Medical University of Graz. 1999 I founded the Institute of NonInvasive Diagnosis of JOANNEUM RESEARCH, a governmental institution for applied research, which since 2010 became the „Human Research Institute for Health Technology and Prevention Research“. Here we use all our basic research experience and knowledge in applied projects to create scientific health indicators and guidelines and programs for better health based on chronobiology and stress and sleep research. Sleep and autonomic nervous system regulation and improvement are in the center of our research fields.

Besides teaching medical and natural science students in chronobiology, Medical Physiology as well as Psychoneuroimmunology, my key interest are the interaction of human organ systems, their chronobiological interplay and integration and the self-organisation of body functions, especially during sleep and phases of relaxation and recuperation.

I would like to give you an overview of what we are doing here in Graz, and especially in Weiz, Austria. We investigate biological time, biological rhythms. There is a short film that was made few years ago by National Geographic, where they investigated the heads of the Moai - the special heads on Easter Island - and they were not sure how the original inhabitants had brought these statues to the sea. When they asked the old people how it was done, the people said that it was very easy because the statues walked there themselves. The white people of course did not believe this until the National Geographic team came and observed a similar situation. The case that was captured the National Geographic shows that old wisdom is sometimes right, but in a different way than we expected. Actually, the scene shows that resonance is able to stabilize a state very well, and even a five-ton Moai statue can be moved by just using resonance frequency.

Now, our research in the 1990s was space research with the Russian space agency. We made jackets for cosmonauts and the jackets were made with natural colors and natural materials, because we were sure that this was the best way to equip humans even in space. The jacket was actually popular among the Russian cosmonauts - they chose it as the best experiment that they had done on this mission, and they found it fun to use. We used these jackets to measure cardiovascular parameters. The most interesting of these were the body rhythms as they are visible in the human heartbeat; the human heart carries a lot of rhythms, such as the respiratory sinus arrhythmia, which comes from respiration, the blood pressure rhythm in about ten second intervals; the peripheral circulation which has one minute rhythms; the BRAC-cycle with 90 minutes rhythms, and the circadian cycle. There are many other cycles too, and together these cycles form something that we can call the time body or time organism of the human body. The interesting thing is that this time organism really reacts to diseases. We measured a healthy subject over approximately 24 hours. In this healthy subject, the heartbeats of a given time period were investigated by using a so-called ChronoCardiogram, which analyses the different frequencies that are in these heartbeats. It is quite fascinating that very similar sonograms of bird songs can be observed in a healthy tropical forest, and each of these birds uses a different frequency band. As do the different rhythms in the human organism. The different organs use different frequency bands. Another interesting phenomenon is that diseases totally change these rhythms. The same differences as observed in the pictures of a 24 hour recording of a healthy 11 year old boy in full health and a 24 hour recording of a man with cancer metastases shortly before he dies, can actually be observed in the rainforest. An American musician who works with so-called field recordings, Bernie Krause, published the book Voices of the Wild. He recorded bird songs in a healthy tropical forest and then again after logging. Once the birds left, there are obviously no more rhythms, no more songs. You can observe the woods dying in a very similar fashion as to how you can observe a human dying. We believe that these kind of ChronoCardiograms and recordings of human heartbeat oscillations are a very good way to observe the effects of what you call alternative medicine or complementary medicine.

Research on rhythm, poems and meditation

We also investigated the effect of meditation and poems, you could say mantras, in our research. We used the recitation of a poem by Nietzsche. It is a declamatory poem with a lot of emotion in it and it has quite a different type of expression than the recitation of a hexameter from Idylle vom Bodensee by Eduard Mörike. We used lines in the heartbeats to represent overtones, basic frequencies and overtones, so the heart starts to produce not only singular tones but whole sounds or ‘klang’ as we call them in German, which is the best term as there is no word for this in English. We used these kind of recitations in human settings. This landed us in Time magazine, because we investigated people with heart problems, not serious heart problems but palpitations and similar reciting, and these people displayed much fewer such problems after reciting Greek poetry for a while - half an hour two times a week for about nine weeks, so not too much of it. And the heart actually improved just by speaking the right mantras. We were then invited to reproduce this in a setting with construction workers. These construction workers were involved in rhythm therapy. We used eurythmy and also hexameter. They moved around carrying sticks, and the poems were recited to these construction workers so that they moved in rhythm with these poems. The results were very surprising: their sleep quality improved a lot. We studied people who initially partook gymnastics for four weeks and then switched to a rhythm therapy. The sleep quality improved a lot during this time. Whereas the sleep quality of the construction workers who did not do anything just decreased from 80 to 60 percent. The quality of sleep for group who started with rhythm therapy and then switched to normal movements, to gymnastics, at least remained the same. This was repeated in 85 Austrian construction companies and it reduced the number of sick leave days by 49 percent and a 25 percent reduction of accidents was observed, as the workers slept better and were more alert during the workday. Even a year later, there was still a 27 percent reduction in the number of accidents – even when the program had been discontinued. So the effect lasted for at least a year. Finally, I’d like to point out that the classical view of a human is identical with the view of a present-day medical doctor. It is the view that Andrea Vesalius and Leonardo da Vinci brought into medicine when they depicted the first anatomic sketches of human subjects that were true to reality, and interestingly enough medicine has not moved on from that. They still work with anatomy, chemistry, substances and energy - but not with time. This field of study is only just beginning now, we have only studied this field for thirty so far. I think that it will be a successful complement, especially for medicine that takes time into account, such as all Asian medicines with the organ clock, and the palpation of the pulse in the Indian, Tibetan and Chinese medicines. I hope these medicines have a very promising future, because I think that this is the medicine of the future as it will also include prevention at the core of its activities. Thank you very much.